During these difficult weeks I am trying to provide some information about the evolution of #COVID19 in Italy by posting on different social networks (Twitter, Facebook and LinkedIn) a simple graph which represents the evolution of the percentage growth of total confirmed #COVID19 cases, vis a vis the previous day. For example, if in a given day the percentage growth is 10 percent, this implies that confirmed cases have grown by 10 percent: if they were 10,000 yesterday, today they are 11,000. 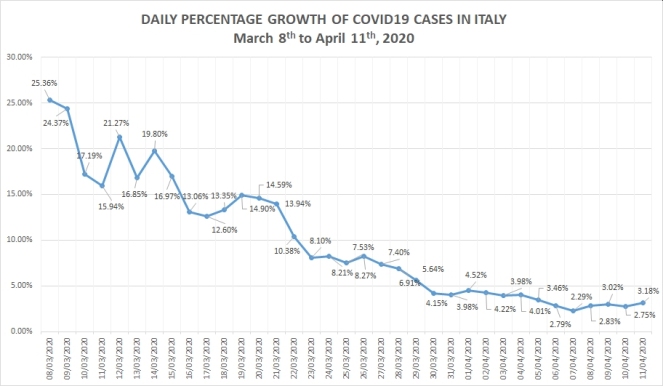 From a mathematical point of view, I divide the absolute increase of confirmed COVID cases (say from April 10th to April 11th, today) by the total number of COVID cases for the initial day (April 10th, yesterday). Every day around 6pm the director of Italy’s Civil Protection Department (Protezione Civile) holds a press conference and provides journalists with a fixed-format PDF file, which shows at the bottom the total number of confirmed cases (see the picture below, “CASI TOTALI” in an orange cell: on April 11th there were 152,271 total cases). Then one can simply subtract from that figure the same figure as of April 10th (147,577) to obtain an absolute increase of 4,694 cases. This absolute increase implies a percentage growth of 3.18 percent: 4694/147577 = 0.0318 = 3.18%. 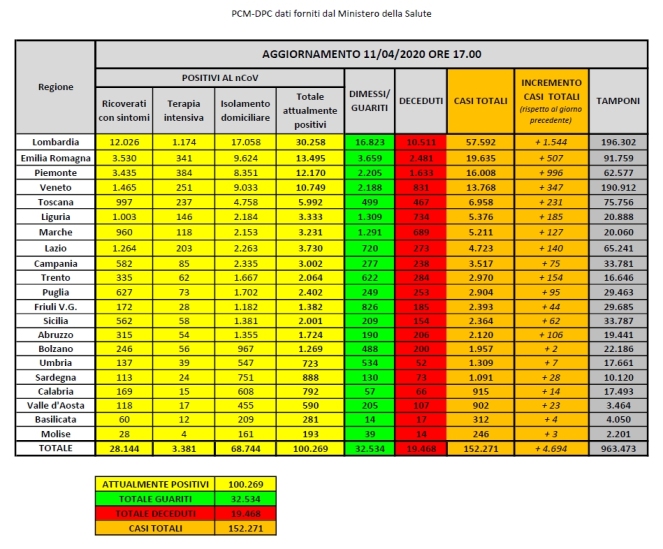 [Pay attention: since I calculate the daily difference in total confirmed cases, this absolute increase would include not only currently COVID-positive individuals but also the deceased and the recovered ones.]

Here you can see (again) the graph for today.

I have read very interesting articles about the evolution of #COVID19 cases, but often -according to my opinion- they are too lengthy. Here I take a different approach, not to waste your time: I would simply discuss three reasons why I find it useful to represent the evolution of the epidemics in this way. In particular, I will focus on the choice between representing the percentage growth of confirmed cases (3.18 percent yesterday and then back in time) or the dynamics of daily absolute increases (4694 yesterday and then back in time).

1) [percentage growth or absolute increases?] If it is the case that social distancing and other containment measures attempt at lowering (down to zero?) the probability that a positive COVID case would infect other people, it is intrinsically crucial to investigate this average probability, and its dynamics. For example, if this probability is 20 percent, then on average 10,000 COVID-positive individuals would infect 2,000 other individuals (on average). Rigorous epidemiological models aim at specifying the timing of the infections as reasonably and as precisely as possible, while here – to keep things simple and represent the data using a minimal set of initial hypotheses – I simply try to describe the percentage increase from a day to the other: that’s it. One could rightly object that we are concerned with absolute increases (more cases) because they are the ones that hospitals and ICUs (Intensive Care Units) must managed promptly and effectively. However, according to my opinion a graph that shows the absolute increases from one day to the next might induce us to forget that – as the number of infected individuals does increase – a given probability of contagion that is fixed over time mechanically leads to a growth in absolute cases: 20 percent of 1000 cases are 200, while 20 percent of 2000 are 400, and so on. On the other hand, a graph showing the increase in absolute cases has the advantage of clearly showing when the curve of total COVID cases becomes concave after its initial convex phase, typically going through the intermediate -and not necessarily short- phase during which it is linear. Just to be concrete: (i) in the convex (“exponential”) phase, the increases in cases increase from one day to the next, (ii) in the linear phase the increases are roughly equal across days, while (iii) in the highly desirable concave phase these increases decrease over time. In any case, going back to to the percentage growth trend of confirmed cases, it is exactly true that everybody should prefer a lower than a higher percentage growth rate (I think it is good to state the obvious), and that the percentage growth rate is zero when the absolute increase is zero.

2) [cross country comparisons] Different countries have different population levels, with orders of magnitude ranging from the billions of China and India, the hundreds of millions for the U.S., the tens of millions of Germany, France, Spain and Italy, and so on. Contagions necessarily take place locally, i.e. through close contact between human beings (or with surfaces recently touched by infected humans) but – when the contagion begins to spread in a country – it becomes less and less sensible to compare the absolute increases between countries, since they begin to be heavily influenced by the order of magnitude of the respective populations. How can we deal with this? One solution is to normalize new COVID cases by each country’s total population, so that the same absolute increase is worth less if it refers to a more populous country (I divide by a higher total population). But an even simpler solution consists in considering the percentage increases of total cases, which are precisely scaled by the total confirmed cases of the previous day in that country, and therefore directly take into account the population sizes of the countries under consideration.
3) [doubling time of total cases] From a mathematical point of view, the percentage growth rate provides a quick answer to a simple question, which would give us a pretty neat idea about the the speed of growth of total cases: how long does it take for total cases to double? For this purpose once can use the so-called “Rule of 70” (more precisely, it should be the “Rule of 72” but the calculations are easier if one uses the number 70). If a given quantity increases at the constant rate of x percent -in this case: daily- this quantity would double in 70/x days. For example, a percentage growth rate of 10 percent would imply that total cases double in 70/10 = 7 days, i.e. in a week. If total cases grow by 3.5% per day (a value close to the current one in Italy) total cases would double in 70/3.5 = 20 days. This longer doubling time would crucially help with the treatment of serious cases in hospitals and ICUs: this is what “flattening the curve” is really about.